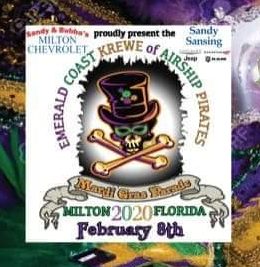 Schedule of Events:
Pre-Party/Lineup: 1pm
Raised On The Radio Band will be on stage from 2 pm-4 pm
Parade Rolls: 5 pm

This year’s route will follow last year’s route, with the addition of floats heading east on Berryhill, south on Willing St, crossing over Hwy 90 and ending with the Inaugural After Party at Jernigan’s Landing! There has never been an after party as EPIC as this!