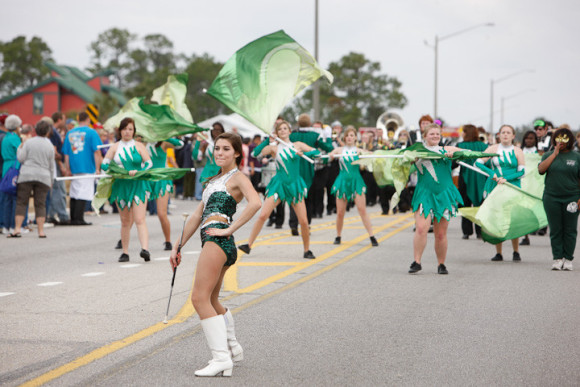 The Orange Beach Mardi Gras Parade was started way back by a loose confederation of groups, large and small, that wanted to parade by the beach. About 10 years ago, the City of Orange Beach stepped in and took over the planning of the parade. It’s still open to participation by just about anybody, even groups from outside of Orange Beach.

The Mystical Maids of Miram and the Mystics of Pleasure contribute to the parade, as do groups from Foley to Perdido Key. Even groups that parade in Gulf Shores earlier in the day move up the road to be in this procession.

The parade begins on Perdido Beach Boulevard at the traffic signal just east of Phoenix West. It will end at intersection at Highway 161 and Perdido Beach Boulevard. Typically, there’s about 55 units in the Fat Tuesday afternoon parade. Expect about 30,000 people to gather along the two-mile stretch to catch the throws.